South Indian Itinerary- A perfect blend of Joy and Satisfaction 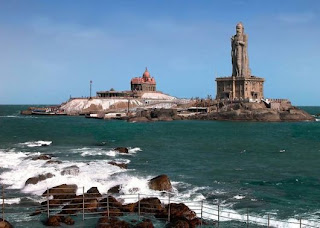 Tamil Nadu plays a major role in South Indian itinerary. On Tamil Nadu tour itinerary you will be able to discover a spotless charm of its heritage and culture. Some of the destinations covered under Tamil Nadu tour itinerary include Chennai, Madurai, Tanjore, Trichy, Kumarakom, Kancheepuram, Mamallapuram and many more spots. Arrive Chennai were you can see some of the attractions like National art gallery, Fort St. George, Marina Beach, San Thome cathedral and Mylapore Shiva temple. Madurai, famous for its Meenakshiamman temple and you can have the visit to Thirumalai Nayak’s palace and Gandhi museum. Tanjore attracts with its rich architecture and tourist places include Brahadeeswara temple, Nandi, Royal Palace complex. Trichy and Kancheepuram famous for its temples include Tirupati, Srirangam temple, Rock-Fort temple, Ganapati temple on hilltop and Shiva temple. Kumarakom, famous for its Vemabanad Lake, kumarakom bird sanctuary. The stunning Mamallapuram, famous for its archeological remains, shore temples and fine beaches. 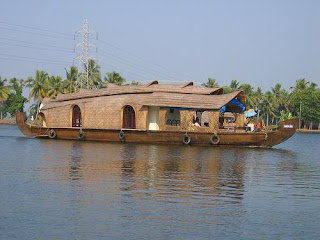 Kerala, well known as “God’s own country” famous for its countless spots of attraction and some of the popular spots of Kerala like Cochin, Munnar, Thekkady, Kovalam, Alleppey. Cochin City includes many sightseeing places that include Fort Cochin, Santa Cruz Basilica, Dutch Palace at Mattancherry, St. Francis Church and Chinese fishing nets. Munnar where tourists can enjoy panoramic views of Anaimudi, the highest peak of South India, wildlife watching at Eravikulam National Park, Madupetty Dam, a famous picnic spot for boating and horse riding. Thekkady, is the location of Periyar National Park, which is an important tourist attraction in Kerala. Kovalam, a small town famous for its beaches. The three beaches Lighthouse Beach, Ashoka Beach and Hawa Beach form the crescent shape of the Kovalam Beach. Other attractions of Kovalam include Koyikkal palace, Vellayani lake, Sankhumugam beach. Alleppey, known as “Venice of east” because of its numerous waterways, numerous tourists visit Alleppey to enjoy the impressive natural beauty, palm fringed waterways, sandy beaches, houseboat holidays & the popular boat races. 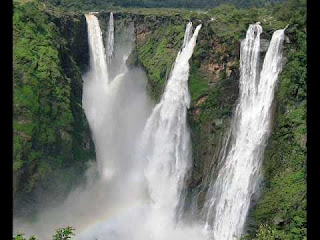 Karnataka is a land of fragrance known for its ancient and medieval heritage which is reflected in South Indian temple architecture and it plays a major role in South Indian itinerary. You can enjoy the fairs and festivals of Karnataka that celebrate life in all its infinite variety. Karnataka offers a lot for tourists such as landscaped gardens, the famous Jog falls, the Mysore palace, the stone palace of Belur, beaches and many more. The Karnataka itinerary includes the cities like Bangalore, Coorg, Kabini, Mysore, Hassan. Bangalore, the “Garden City”, many tourists are attracted to Bangalore because of its warm weather, parks, lakes, museums, art galleries. Botanical gardens of Lal bagh, the Cubbon Park, other famous gardens in the city are Cariappa Memorial Park and Bannerghatta National Park. Coorg is famous for its wildlife, Nature, adventure, religious places, historic sites, plantation tours and many more. Mysore is one of the famous tourist visiting places famous for its Ranganathittu Bird Sanctuary and Vrindavan Gardens. Hassan has many tourist attraction places like Famous Chennakesava Temple, Halebidu Hoysalaeswara Temple. 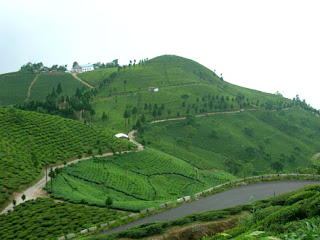 Andhra Pradesh famous for its many number of religious pilgrim centers and is very famous spot in South Indian itinerary. Some of the attractions of Andhra Pradesh include Hyderabad, Warangal, Vijayawada, Amravathi, Vishakapatanam, and many more. Hyderabad has its own beauty having many number of tourist spots like Golconda Fort a splendid edifice and other attractions such as Charminar, Nehru Zoological Park, Salarjung Museum and Birla Planetarium. Followed by Warangal, this is famous for its Thousand Pillar Temple, the Warangal Fort and the Ramappa Temple. Vijayawada, famous for its temples, the famous Durga temple and for many temples. At Amravathi, the visitors can enjoy the ruins of Buddhist Stupas and exquisite temples. Vishakapatanam, has a range of tourist attractions including beaches, cliffs, hilltop parks facing the sea, a beach road, a zoological park and wildlife sanctuary, a submarine museum, hill stations.
Posted by Unknown at 02:50 5 comments:

The southern part of India is generally very famous for its various spices and also for spicy foods. South Indian cuisine offers wide variety of trendy dishes and displays a wide range of both vegetarian and non vegetarian dishes. South India cuisine is the most popular and hottest of all Indian food. It is mainly rice based and is equally famous for the availability of coconut and wide variety of spices like cardamom, pepper, cinnamon, cloves and nutmeg. Cooking patterns in the southern states of India largely remains the same, but each state is famous for its own dishes. South Indian food is very spicy and is a brilliant combination of flavors, colors, fragrance, taste and nutritional balance.
South Indian cuisine includes the following culinary schools- Karnataka, Kerala, Tamil Nadu, and Andhra Pradesh. 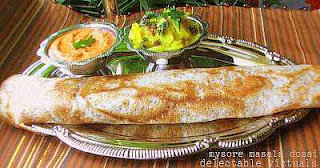 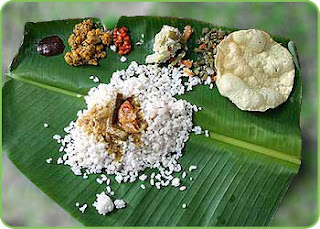 Kerala another significant state of South India with fish and steaming rice as the staple food. Kerala is well known for its traditional sadhyas, a vegetarian meal including boiled rice and variety of side dishes which is especially served during special occasions and festivals. The sadhya is complemented by payasam which is usually served on a banana leaf. The culinary skills of different communities of Kerala make the dishes distinct in taste and variety. Almost all dishes of Kerala have a rich blend of spices and coconut added to it. Historically, Kerala is a part of Tamil speaking area, so the Tamilian influence can be clearly noted in some of the Kerala dishes like Sambhar, idli and in dosa. 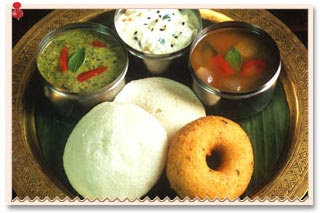 Tamil Nadu, the diverse state of South India holds the belief that serving food to others is a service to humanity. The Tamil Nadu cuisine involves both traditional vegetarian and non vegetarian dishes. Chettinad cuisine is very popular and special in Tamil Nadu and it is one of the spiciest and aromatic cusines of India. Some of the popular dishes in Chettinad are varuval, kuzambu, poriyal. Filter coffee, strongly brewed Tea are famous in Tamil Nadu. Tamil Nadu provides the visitor with a wide variety of dishes including both vegetarian and non vegetarian. Generally lunch or meals composed of cooked rice served along with series of vegetable dishes, sambar, chutneys, rasam and chutneys. The non vegetarian lunch includes curries or dishes cooked with mutton, chicken or fish. 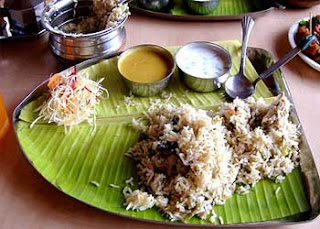 Andhra Pradesh is very famous for its hot and spicy cuisine which is largely vegetarian but the coastal areas have a large collection of seafood. Rice is the majorly consumed staple food that is consumed in large quantities in the state. Hyderabadi cusine is a famous section of Andhra cusine that offers the Nawabi royal recipes. The traditional Andhra dishes are absolutely mouthwatering and are served on a banana leaf. The Hyderabadi food is famous for its rich and aromatic nature. Andhra is very famous for its sweets and savouries especially made during festive and auspicious occasions. In Andhra Pradesh, each meal is served along with curd. 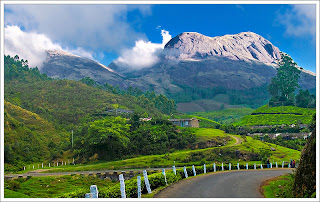 Kerala, well known as God’s own country is the land of green magic attracts most of the tourists throughout the year, is the one major South India attractions. Kerala, the landscape is mostly dominated by rice fields, mango, cashew trees, and coconut palms. It is well known for its Backwaters, beaches, National parks, hill stations, beaches. This state in the southern tip of India has its great mind blowing landscape, varied culture and attractions. Some of the attractions that you can look forward in the God’s own country are Kochi, known as Queen of Arabian Sea, which is the vibrant city and considered as the most important city on the west coast. Kochi is famous for its attractions like Fort Kochi, Mattancherry, Ernakulam. The other attractions of Kerala include Munnar, the breathtakingly beautiful place with magnificent mountains, exotic species of flora and fauna in wildlife sanctuaries and thick forests. Another attraction, Thekkady which has the largest wildlife sanctuary and dream destination of most of the tourists. Kovalam is also one of the beautiful attractions of Kerala which is described as the ‘Paradise of the South India’. 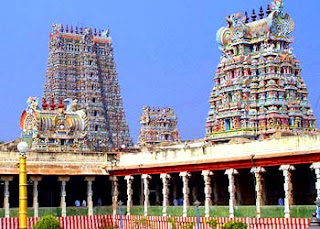 Tamil Nadu famous for its wonderful temples, cultural heritage, enchanting beaches, hill stations, and amazing wildlife is also one of the southernmost states of India and forms the South India attractions. Majority of tourists visit Tamil Nadu each year and are rewarded with a beautiful holiday experience. The temples are the main attractions in Tamil Nadu, representing the ancient Dravidian cultures. The famous temples include Kanyakumari temple, situated in Tamil Nadu on the sea shore. Other attractions in clued Madurai, one of the temple towns, which has a rich cultural heritage passed on from the great Tamil era. Thanjavur, known as the “Rice bowl of Tamil Nadu” famous for its temples. The Mahabalipuram, situated on the shores of the Bay of Bengal with rich monumental splendors. The most attracted spot in Tamil Nadu, Ooty is the great attraction known as “Queen of Hill stations” is also one of the perfect tour spot for visitors in Tamil Nadu. 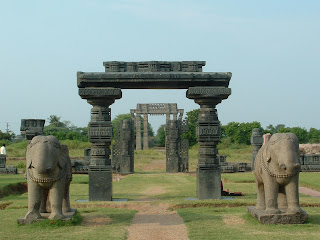 Andhra Pradesh lies on the South west coast region of India, spread with pristine beaches, forts, wildlife jungles, monuments, and this state is one of the South India attractions. This place is very much ideal for studying different Indian culture and religion where different religion meets each other to form one. Among the best places to visit in Andhra Pradesh, Hyderabad is the first one, which is known as a city of Information Technology. Charminar, Ramoji film city, Golconda fort, Indira park, Mecca masjid are the places which are a must see. Tirupathi temple, considered as the most sacred and richest temple in the world which attracts millions of tourists each year. Vishakapatanam, is another spot which is a industrial and shipping centre famous for its beaches. 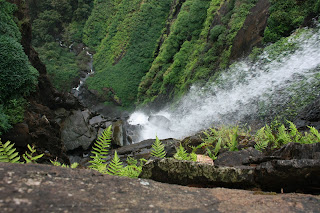 Karnataka is a delightful state with lots of tourist attraction spots which will make you feel most comfortable and happy throughout the vacation and is one of the South India attractions. Bangalore, home to the IT industry, having variety of shopping malls, restaurants, parks and gardens, the city is an idealistic escape for a tourist. The Bangalore Fort palace, Lal bagh and Cubbon Park are the famous and most visited places. Madikeri/ Coorg, known as the “Scotland of India” has its lavish hills, groves and forests making it a memorable holiday spot for each tourist. Mysore, is another famous tourist spot in Karnataka, is the city of Royal Places, scintillating forts and beautiful parks. Sravanbelgola is also in South Karnataka, and is a host to world’s tallest monolithic statue, is a must see place in Karnataka. The beaches are also the attractions in Karnataka, which include Mangalore, Karwar, Gokarna, Malpe and Marwanthe. 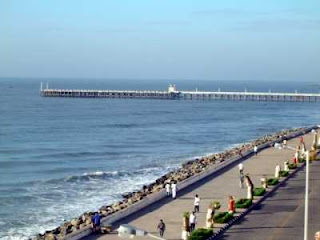 Pondicherry,one of the South India attractions, also known as Puducherry is a famous tourist attraction in South India located on the west coast of Southern India. Pondicherry is always been a favorite attraction in South India for tourists, the city once ruled by the French, so the city has retained French influences. The major tourist attraction place of Pondicherry includes Chidambaram, which is a famous temple town famous for pilgrimage activities. Poompuhar, is a beautiful spot which is used to be one of the largest ports in ancient times and is an attractive south Indian attraction that can be visited during the tours of Pondicherry. Thiruvanmalai, is another temple town famous for the Arunachaleshwara temple, is also among the places to visit here. Arikamedu, is a place in Pondicherry, which is a perfect attraction in Pondicherry.
Posted by Unknown at 03:19 14 comments: